On 3 April we were delighted to have five runners complete the London Landmarks Half Marathon (LLHM). This wonderful course takes in the sights of Westminster before it snakes round the City of London. We had a fabulously sunny (albeit chilly!) day and the atmosphere was terrific. Each set of runners had a ‘Cheer Station’ of supporters from the charities for which they were raising money. 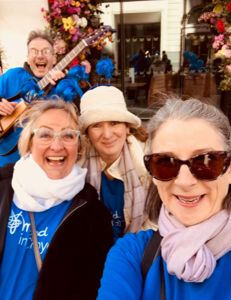 This was the first time Mind in Croydon had taken part in an organized run. All runners exceeded their targets and the total raised from donations for Mind in Croydon was £2530.00. One runner added to this by obtaining match funding from their workplace. The icing on the cake was that Just Giving informed us that out of thousands of fundraisers ours were in the top 15%!

We were really grateful to Angela, of our Hub/Carers Support Service. Angela not only stood all morning with our Head of Fundraising, Cara Scott and our Chief Executive, Philippa Thompson on the Mind in Croydon Cheer Station near Moorgate, but she also provided two of the runners with her daughter and daughter’s partner completing the course in excellent time. They ran it all in only 2 hours 34 minutes. Thanks also goes to Andrew Scott our guitarist for playing a selection of upbeat music to keep everyone entertained as they run past. A huge thanks goes to all our five runners, David, Ben, Issy, Mia and Sean who did us proud. If anyone fancies running and raising funds for Mind in Croydon at next year’s LLHM please get in contact with Cara at admin@mindincroydon.org.uk