MiC Chosen as one the Mayor’s charities 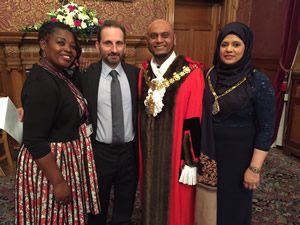 At the Mayor Making ceremony on the 20th May, it was announced that Mind in Croydon are to be one of the Mayor of Croydon’s charities. We are delighted that the Mayor, Cllr Humayun Kabir, has chosen us and we look forward to working closely with him and his team during his Mayoral year. The photograph shows Mind in Croydon CEO Richard Pacitti, the Mayor and his consort and Cllr Janet Campbell, the mental health champion for Croydon.